The Lei for Paris project began with a conversation between Ron Panzo with Nalu’s South Shore Grill and Sherrie Austin with the Cynthia Rose Foundation about Paris needing a big hug and how great it would be to send a lei to Paris. Ron said, “Right now when you turn on the television all that’s on is sadness, grief and fear. Right now we need to shine a light on the world.”

The Lei for Paris project was born. 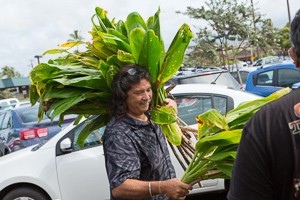 Though the original idea was to make the world’s longest lei for Paris but after some research they found that the record was 3.11 miles for a fresh flower lei made in India. So they scaled back and decided on making a mile long orchid lei.  After some napkin math, Ron realized they would need close to $8000 to buy enough orchids to make the lei so he began calling his friends for donations.  One of the first calls he made was to Tim Lara who answered “you bet, whatever you need…. but why fly in orchids from Asia when we can make a Ti Leaf Lei?  We have plenty of Ti on Maui and can get started right now.”

Ron agreed and the work started; planning the harvesting of the Ti, calling people to get involved, finding donations, organizing the purchase of orchids to wrap around the Ti leaf lei, and lining up pop up tents for the Nalu’s South Shore Grill parking lot so there would be a place to work.

Volunteers harvested the first load of Ti leaf on Saturday, November 21, 2015, and brought the first truckload to Nalu’s that morning. Making a Ti leaf lei requires many steps – After harvesting, the Ti leaf is cut from the main stalk, then the leaf is cut in two to remove the hard center. The Ti leaf is then either ironed, microwaved or frozen to make it more pliable and suitable for weaving. Finally, the Ti is woven together by twisting the leaves together and forming the Lei. 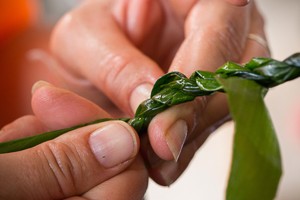 Community members from Maui and as far away as Kauai worked on the lei 5 full days, 12 hours a day until the mile was finally completed Wednesday, November 25, 2015. Actually, when finally measured the total length was 5,460 feet – 180 feet over a mile. 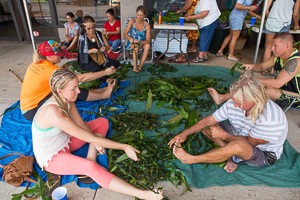 The outpouring of support from the community was absolutely incredible – at least 150 people contributed to the Lei For Paris either by helping weave the lei, financial donations or assisting with picking up supplies and logistics. The local media was also a big help, with the Maui News, Hawaii News Now, KITV, The Star Advertiser, Maui Watch, Maui Now and The Huffington Post all getting the word out into the community.

The feeling at Nalu’s from everyone working to weave the lei was of love, togetherness, kindness and compassion. Community volunteers sat together and worked on the lei; talking story, singing songs, and weaving all that aloha and love into every inch of the lei.

Constructing the lei was only one part of the logistics puzzle. How would the lei get to Paris? Who would take it? Who would the lei be presented to? So many questions were out there but the team kept going – and holding the belief that everything would work out – somehow, the lei would make it and somehow they were going to get everything done.

The team decided to separate the lei into Eight 1/8th of a mile sections – one for each of the Hawaiian Islands – and wrap each of those sections with orchid flowers. 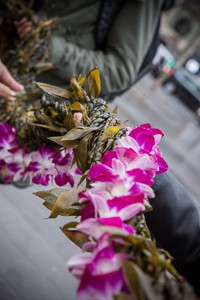 The day after weaving began there was a story in The Maui News about a delegation of young adult leaders from Maui heading to Paris for the COP21 negotiations, a United Nations gathering of world leaders in Paris to discuss climate issues. Lei for Paris team members met with the delegates and asked if they would be willing to take the lei to Paris. They were very emotional and said they had hoped to take leis but had not been able to arrange it – so of course they would take the mile long lei and were excited to help. They left for Paris Monday, November 23, while the lei was a half a mile long.

A huge gift and surprise soon followed, when United Airlines heard about the Lei for Paris project and offered to cover the cost of shipping the lei and one of the organizers to Paris and discounted fares with the other two team members. What a huge blessing to the Lei For Paris project! 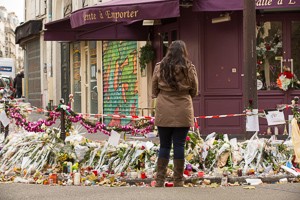 On Wednesday, November 25, 2015 after a traditional Hawaiian Blessing, volunteers connected all of the sections for the lei for the very first time and measured the total distance at Makena Beach and Golf Resort – measuring in at 5,460 feet. 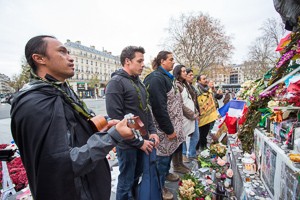 The Lei was again separated into 1/8th of a mile sections and packed into six containers, and off to the airport it went.

The Lei and Ron and Sandy Panzo left that evening and landed in Paris after 21 hours of flying on November 27, 2015 with Tim Lara and Sherrie Austin following the next day. 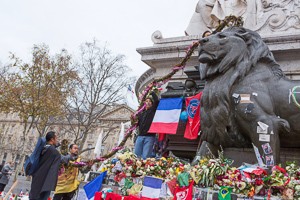 The team placed sections of the lei at sites of the attack, including the Bataclan, Salle a L’etage and the Republic. 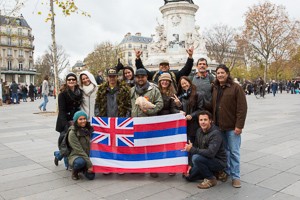 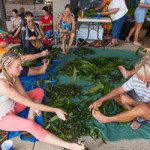 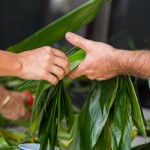 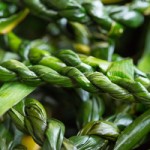 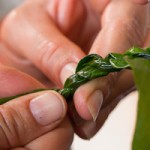 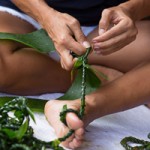 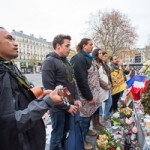 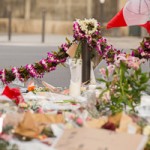 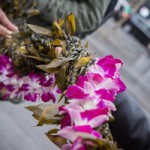 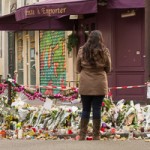 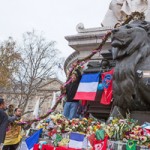 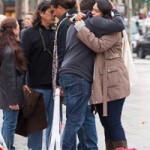 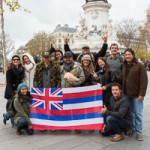